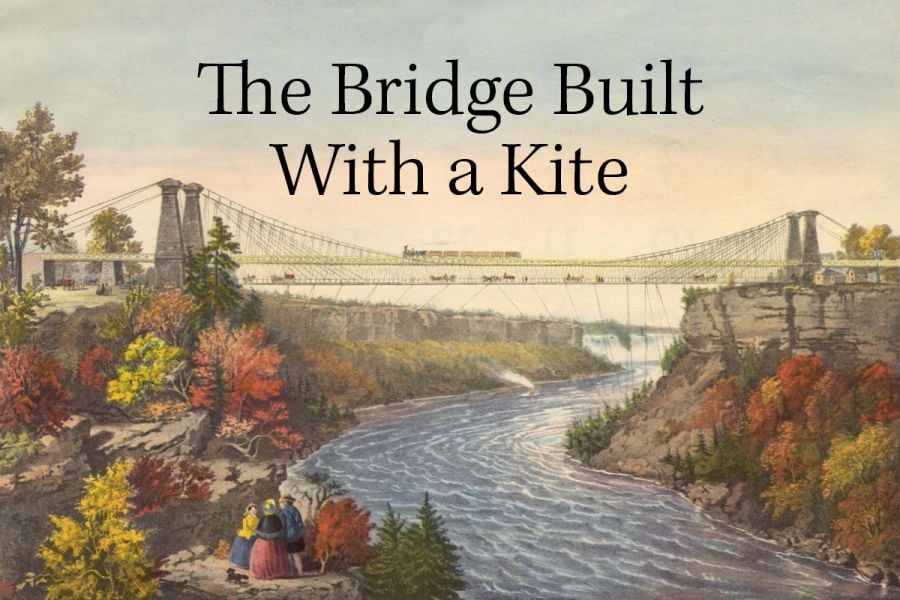 When thinking of your next day trip, think of Niagara Falls! The area has an amazing history full of characters you may have never even heard of! For example, have you heard of a teenage boy named Homan Walsh?

Homan was one of many participants in a kite flying contest sponsored by Theodore G. Hullett in 1848. Hullet was associated with the suspension bridge construction project, which would eventually link the nations of Canada and the United States of America. The sole purpose of the contest was to get a light line across the river in a section where the gorge was very deep and could not be navigated due to the incredible rapids that prevented any type of navigation at the time. Once over the river, the kite line was to be used to pull across increasingly heavier and stronger lines until a steel cable could be drawn across. Once a single steel cable was in place, construction methods of the day would provide an opportunity to construct the bridge from this single cable which would be used as a transport line for other cables and materials.

Homan Walsh was 16 when he took up the challenge to fly a kite across the Niagara Gorge. Walsh’s winning attempt came after many days of trying and long delays in the process due to difficult January weather. He worked at flying his kite from the Canadian side to the U.S. side to take advantage of prevailing winds. He was successful in flying his kite over the gorge and won the contest, along with the contest prize of $10, which was a princely sum at that time!

Although he moved out of the area as an adult, he is now buried in Oakwood Cemetery, 763 Portage Road, Niagara Falls, NY. The cemetery is located across the street from the Niagara Arts & Cultural Center so if you go to visit the site, stop into the NACC, say hello and pick up some more detailed and interesting literature on Homan!