First Date: The Musical on Stage 2/15-18 at Patchwork Theatre

The Patchwork Theatre presents First Date: The Musical, for a limited run this Valentines day weekend.

The musical comedy takes a light-hearted look at dating in the modern era and just how difficult it can be to connect with someone in a world where everyone is already so informed thanks to google and social media. The show even includes an actress (Courtney Gerou) portraying the personification of Google.
The 90 minute show follows Aaron (David Moran) and Casey (Rosie Lorenti) on their first date as their evening is interrupted by a lounge singing waitress (Ciara Davie), bail-out phone calls and the imaginary duo of Aaron’s womanizing best friend (Billy Horn), and Casey’s mature sister (Nicole Morreale), who try to coach them through their date.
The story, by Austin Winsberg, is a sweet tale of two very different people finding each other despite their differences of careers, religion and social outlook, as they discover more about each other proving one should never judge a book by its cover.
The music, by Alan Zachary and Michael Weiner, varies from pop to camp effortlessly as the score compliments each scene in which music is used, from the introduction of our heroes in “First Impression,” to the hilarious “I’d Order Love”, to the heartbreaking, “Things I Never Said.”
First Date the Musical runs Feb 15th, 16th, 17th and 18th at 8pm at the Patchwork Theater of Niagara, Located inside the NACC at 1201 Pine Ave, Suite 104.
For tickets and information visit Facebook.com/PatchworkNiagara 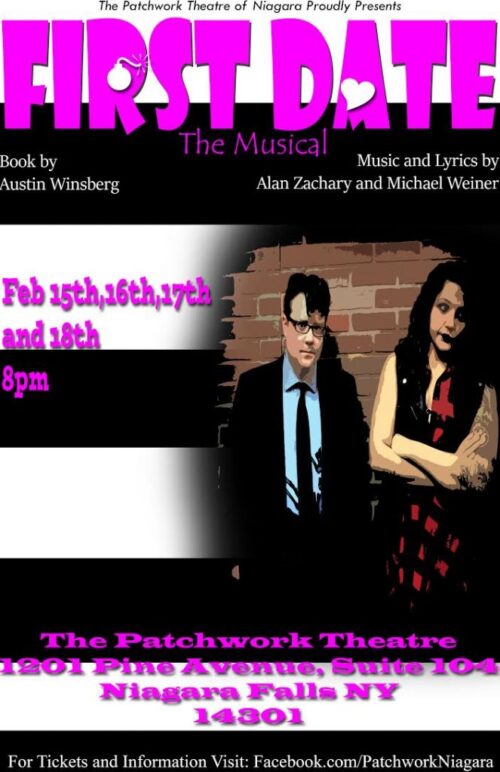