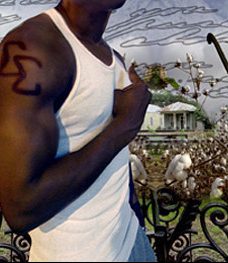 Niagara Falls, N.Y. — Stephen Marc, a noted African American photographer and digital montage artist, has spent nearly a decade on the road in the U.S. and Canada documenting the places and people associated with America’s Underground Railroad.

This network of secret routes and safe houses used by escaping enslaved African Americans is the subject of “Passage on the Underground Railroad,” an exhibition of complex digital montages by Marc that will be May 11 – June 30, 2019 at Niagara Arts & Cultural Center.

The exhibit will take place in the Townsend Gallery at the Niagara Arts & Cultural Center. It is free and open to the public. A public reception will be hosted on May 11 from 5-7 PM.

Stephen Marc, a noted African American photographer and digital montage artist, has spent nearly a decade on the road in the U.S. and Canada documenting the places and people associated with North America’s Underground Railroad. This network of secret routes and safe houses used by escaping enslaved African Americans is the subject of The Passage on the Underground Railroad. For this epic project, Marc took thousands of photographs at more than 100 historic sites in over thirty states and in Canada, and collected a vast number of artifacts, documents and historic photos for use in his montages.

The Passage on the Underground Railroad is comprised of two series: the Underground Railroad sites and montages. In the sites series, Marc has documented the individual Underground Railroad locations with photographs taken inside and outside historical structures as well as the surrounding landscape. In the montage series, Marc marries the landscape to slavery through the use of plantation sites, primary source documents and other remnants of slavery from diverse sources, many of them collected by the artist, and combines these with pertinent modern cultural references. Woven together digitally, the final images create narratives that generate insightful juxtapositions and bring the past palpably into the present.

This particular project was initiated during Marc’s 2000 residency at CEPA Gallery in Buffalo and three of the 35 Underground Railroad sites employed in the original exhibition are in Western New York. They are the Michigan Street Baptist Church, Buffalo, a legendary Underground Railroad station; Murphy Orchards, Burt, NY, where the McClew family sheltered escaped slaves for 20 years in secret rooms before moving them to the next station, and Root House in Pekin, NY, home of abolitionist Thomas Root and one of the last stops on the railroad. From here, in the 1850s, former slaves were transported to the Canadian border hidden in farm wagons full of produce.

Stephen Marc’s prestigious awards include the 2009 Elizabeth and Mallory Factor Prize for Southern Art, and fellowships from Midwest Regional National Endowment for the Arts, the Aaron Siskind Foundation and the Mellon Research Fellowship from the Virginia Historical Society. A professor of art at Arizona State University’s Herberger College of Fine Arts, Marc has received ongoing support from Olympus Imaging America Inc. as an Olympus Visionary, as well as from the National Park Service as a National Underground Railroad Network to Freedom program.